Solving the College Affordability Crisis Requires Yanking at the Root

Last week, a POLITICO Magazine article called attention to the annual re-estimate of the federal student loan program. Apparently, the feds expect to earn $22 billion less than expected on student loan payments, which was the result of an unexpected uptick in the number of student loan borrowers taking advantage of the Obama administration’s debt-relief programs. While efforts to assist struggling borrowers are needed, it is important to acknowledge that these debt-relief programs only address the symptoms of the college affordability crisis. They ignore the root cause.

Many think that the primary cause of escalating tuition and fee increases is the result of rampant spending in higher education. And they are not wrong, at least if they are thinking about private, four-year colleges and universities where annual increases typically exceed the rate of inflation. However, out-of-control spending is not to blame at public, four-year colleges and universities. The real culprit there is declining state support for higher education, which has shifted costs once borne by taxpayers onto the backs of students and families.

Not too long ago, attendance at a public institution was relatively affordable, primarily because state governments picked up much of the tab through direct funding provided to institutions. But, oh, how the times have changed. In 1988, net tuition — or payments from students and families — only accounted for nearly 24 percent of higher education revenue nationwide; today it accounts for nearly 48 percent. As you can see from the chart below, net tuition contributes roughly 85 percent of total higher education revenue in states like New Hampshire and Vermont and more than 60 percent in 13 other states. 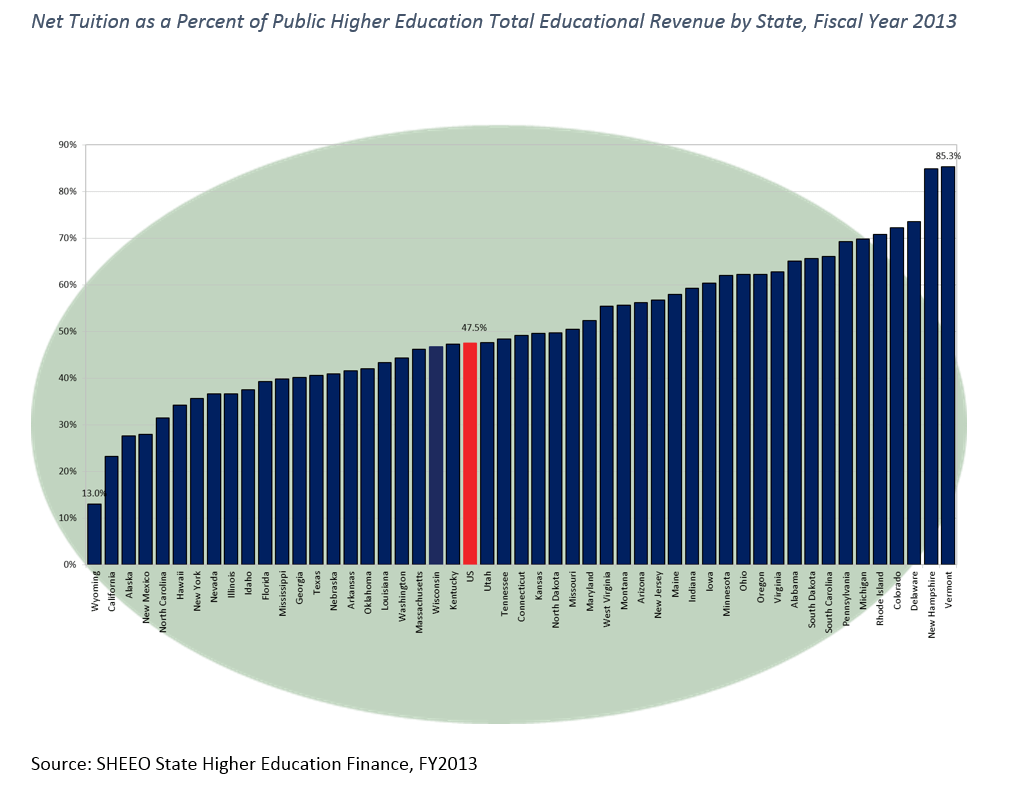 Obtaining a postsecondary degree or credential has significant personal benefit, no question about it.  But we can’t forget that there are significant societal, or public, benefits as well. Society can’t function without teachers, engineers, scientists, and doctors whose work, in most instances, enhances all of our lives. College-educated citizens are also more likely to be engaged civically and less likely to rely on public assistance programs — while contributing more money to the tax base.

These social benefits demand a considerable public investment from the states. When states fail to pay their fair share, the cost burden gets disproportionately shifted to students and families, who increasingly rely on loans to foot the bill. And when they are unable to repay these loans, the federal government has to bail out borrowers with taxpayer money. This means that taxpayers in states that already invest heavily in higher education end up paying twice, as their tax dollars could cross-subsidize borrowers in other states where college is less affordable because of declining state support.

We know that high college costs can have disproportionate effects on low-income students, as “sticker shock” can prevent them from even applying to some schools. Even with need-based financial support, low-income students too often receive financial aid packages that either a) require them to pay incomprehensible percentages of their family income to attend college or b) fail to meet the full cost of attendance even when loans are considered. Ultimately, these realities affect access and completion, influencing students’ decisions to enroll, persist, or seek other options.

As Congress likely gears up to reauthorize the Higher Education Act this year, we hope members can figure out a way to leverage the federal investment in higher education to beef up states’ funding for public colleges and universities. This is key to fixing the college affordability crisis. Several higher education policy organizations, including Ed Trust, have put forward bold policy solutions that can help make college more affordable, particularly for low-income students and families who are most likely to default. But will policymakers find the courage to act and yank out the root?