The Work of a Generation

One of the districts that surprised Sean Reardon the most is Chicago – the nation’s third largest district with about 400,000 students.

No other large or even medium-sized district can boast of that kind of growth from third through eighth-grade. Not only can this growth be seen on the state tests that Reardon analyzed but also on the National Assessment of Educational Progress (NAEP), in which Chicago participates separately as part of the Trial Urban District Assessment (TUDA).

And the improvement doesn’t stop in eighth grade. Graduation rates in the city have been rising steadily and so have ACT scores.

In this episode, we examine what Chicago Public Schools (CPS) is doing to have seen such improvement.

Part 1: Nowhere to Go But Up

To give a little context, we go back to 1987, when then-Secretary of Education William Bennett called Chicago the “worst school district” in the country. Although his statement was shocking to many in the city – and some dispute it to this day – Chicago residents, teachers, and businesses had long been unhappy with how the schools had been run. This dissatisfaction culminated in the passage of the 1988 Chicago School Reform Bill, which established local school councils (LSCs) for the more than 500 schools in CPS. By having an elected school board for every school, the political power of the central office was dispersed throughout the city to parents and community members. This remains true even though there is a strong central office overseen by the mayor.

Two other important things flowed from the 1988 reform act: 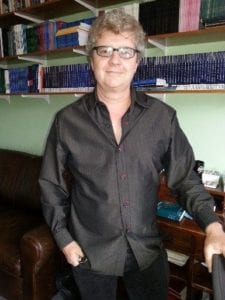 “What’s going on in Chicago that leads to this kind of rapid increase in performance over the late elementary and middle school years? I would like to know that.”
– Sean Reardon, Stanford University

Watch Reardon talks about his analysis of 12,000 school districts to an audience at Harvard University’s Graduate School of Education. He begins talking about Chicago at minute 50:40. 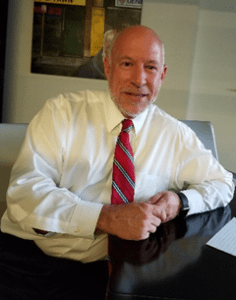 “There…formed a fairly aligned…aggregation of foundations, civic leaders, businesses, and nonprofits that were all organized around strengthening school reform.”
– Terry Mazany, President, Chicago Community Trust, one of the largest of Chicago’s foundations 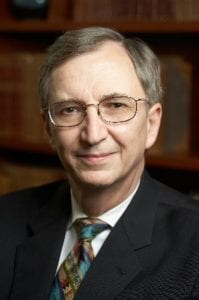 “We brought an analytic and empirical discipline to the work.”
– Anthony Bryk, founder of the University of Chicago Consortium on School Research.
(photo courtesy of Carnegie Foundation for the Advancement of Teaching and Learning)

Part 2: Stumbling Toward Some Answers

In 1998, after ten years of reform, the Chicago Consortium published Charting Chicago School Reform, which found that the establishment of local school councils had spurred some improvement but that that the improvement was uneven. That is to say, some schools had improved and others had not. Improvement was more likely in racially integrated and wealthier schools and in schools with strong leaders. A few years later trust was identified as a key resource for school improvement.

Many reform efforts concentrated on improving Chicago’s teaching force – putting in tougher hiring standards, better professional development, better mentoring, and developing better curricular materials for teachers to use. Those efforts reflected research that says that the most important in-school factor of student learning is the classroom teacher.

So, for example, Steve Tozer of the University of Illinois-Chicago designed and implemented a high-quality mentoring program for new Chicago teachers. But over time what he saw was that principals were key to whether teacher mentoring was effective. “When principals understood it, it was a flaming success and when they didn’t understand it we may as well not have done it.”

At the same time, Peter Martinez of the MacArthur Foundation was finding that he could fund the implementation of a high-quality literacy program, but if the school didn’t have a strong principal, “It goes nowhere and I’m putting money down the drain.”

Together they came to the conclusion that school principals were key to school improvement.

Just a couple of years later, a major piece of national research, funded by The Wallace Foundation, confirmed their observations by establishing that “there are virtually no documented instances of troubled schools being turned around in the absence of intervention by talented leaders.”

The Chicago Consortium reached a similar conclusion in 2010 when it published its major study on school improvement in Chicago, Organizing Schools for Improvement. It concluded that strong school leadership was the essential factor that made all other efforts effective.

The confluence of research and experience around the importance of school leadership has led to a city-wide emphasis on preparing, training, supporting, and coaching principals who want to take on the challenges of leading high-need Chicago city schools.

Part 3: On the Ground

Chief Education Officer for Chicago Public Schools, Janice Jackson, says that the city’s empowerment and development of principals can be directly correlated “to the higher graduation rates and higher test scores that you see here in Chicago.”

Before becoming CEO, Jackson was herself the founding principal of a large new high school on the West Side of Chicago, George Westinghouse College Prep, where 80 percent of students meet the qualifications for free and reduced-price meals and just about all students graduate.

We take a trip to Westinghouse and speak with the principal, Patrick McGill, who says that his job as the school’s leader is to find people for the right leadership opportunities and “cultivate them as leaders but let them know their value, tell them they’re doing amazing work and contextualizing that work.”

Both Jackson and McGill graduated from University of Illinois-Chicago’s Urban Education Leadership program, which has provided a model for leadership programs in Illinois and was featured in a national report on improving principal preparation programs

Even expert principals, however, can use help figuring out what to focus on because, as Jackson says, the job of principal can feel “insurmountable.”

This is where the Chicago Consortium comes back into the picture. Director Elaine Allensworth says that its most important job “is to figure out what are the things that are really crucial to be focusing on.”

One of the early breakthroughs made by the Consortium was identifying that the ninth-grade year was critically important and if students missed school or failed classes in their freshman year – for whatever reason – their chances of graduating dropped dramatically. This led to the “on-track” indicators that are now used in schools and districts around the country.

Says Jackson: “When we saw the freshmen on track data and saw that the research clearly says that if students are successful in their first year of high school they are three times more likely to graduate, principals, teachers, counselors – we really latched on to that.”

The Consortium’s research has become part of the work of educators throughout Chicago. Principal of Nicholas Senn High School on Chicago’s North Side reflects that when she says, “Now they’re finding that students…who have a 3.0 or better are 50 — I think it’s 54 percent — more likely to graduate from a four-year university.”

This refers to the Consortium’s latest research which has led to a new campaign, “Bs or Better,” aiming to ensure that all students get a 3.0 or better in their freshmen classes in order to be well prepared to succeed in college.

One way the Consortium is helping principals understand both the research and to think through how to apply the research in their schools is by building networks of schools, such as the Network for College Success.

By focusing on preparing and supporting principals who in turn focus on supporting teachers, Chicago has made considerable progress. The work of the Consortium has provided some clear ways to continue that progress by, for example, expanding the International Baccalaureate program, which has been found to help prepare students for post-secondary success.

The cloud on the horizon for Chicago is the continual crisis atmosphere surrounding funding and budget cuts, which threaten to undermine the progress that has been made. 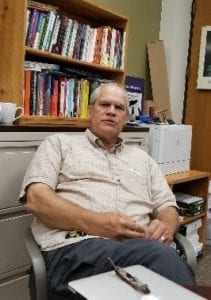 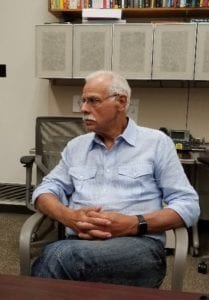 “That became the real beginning of really being able to address this whole issue of leadership in a very systemic way.”
– Peter Martinez, former grant officer at the MacArthur Foundation and co-founder of the Urban Education Leadership program at UIC. 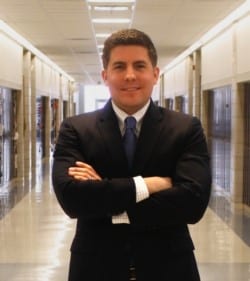 “The landscape of school leaders has completely changed in CPS over the last 10 to 15 years.”
– Patrick McGill, principal, George Westinghouse College Prep 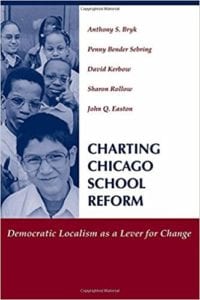 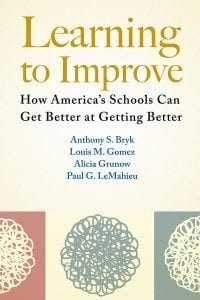 In 2004 Anthony Bryk left the University of Chicago Consortium on School Research and in 2008 he became head of the Carnegie Foundation for the Advancement of Teaching, where he leads a process he calls “improvement science,” which aims to help schools colleges, and other institutions “learn to improve.” 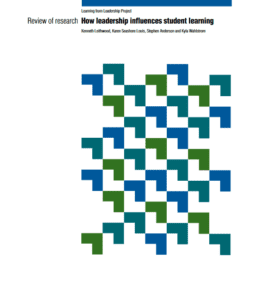 How Leadership Influences Student Learning, the national research that established the critical importance of school leaders.

But it found that effective leaders were the key to the other four.

Improving University Principal Preparation Programs
“While the research is clear that school leaders matter to teacher effectiveness and student achievement – and there is an emerging consensus on the components of high-quality preparation – the field has not kept pace with the need for change.”

Watch a Wallace Foundation video series that documents the work Illinois has done to revamp its principal training. 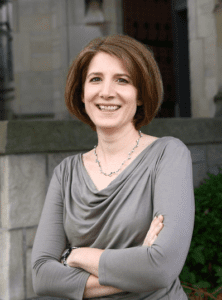 “A lot of people assumed students don’t pass their classes because they don’t have the skills coming into high school to succeed. And we found that no, that’s not true.”
– Elaine Allensworth, director, Chicago Consortium
(photo courtesy of UChicago Consortium on School Research) 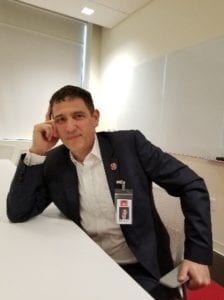 “We are really in danger of sabotaging something which is worthy of some celebration.”
– Jesse Sharkey, vice president, Chicago Teachers Union 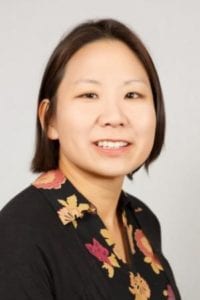 ExtraOrdinary Districts was made possible with a grant from The Wallace Foundation, which fosters improvements in learning and enrichment for children from low-income families and encourages efforts to improve the recruitment, training, and support of school leaders.