Getting To & Through College: Joscelyn Guzman

More Latinos are going to college than ever before, but as Joscelyn Guzman, a first-generation

Mexican-American learned firsthand, getting there is the first of many hurdles on the road to a bachelor’s degree. According to a new Ed Trust report, Latinos are still vastly underrepresented at many American colleges and universities and have the lowest attainment of any major racial or ethnic group. But numbers don’t tell the whole story.

Born to teenage parents in Modesto, California, Joscelyn’s path to college was an uphill one. Her mom worked at Burger King and her dad at Outback Steakhouse when she was young, so despite being on the gifted and talented track, a higher education wasn’t a foregone conclusion. “There’s a lot of love in the family, and they were very supportive of me from a young age,” she says, but there wasn’t much money. Here, she describes her journey, and the support she had along the way:

On applying to college:

In my junior year of high school, my school counselor told me about an all-inclusive summer program at Princeton that helps students like me get into college. It sounded too good to be true, but no one in my family knew how college worked, so I applied to this special program, called Leadership Enterprise for Diverse America (LEDA), because, what did I have to lose? I was accepted and flew to Princeton, a college I’d only seen on TV. I was matched with a college counselor, who said, “I think Occidental College might be perfect for you.” And I remember saying, “I don’t want to be a dentist. Why do you want to send me to a dental school?” She explained that it’s a liberal arts school in Los Angeles. I learned about the value of a liberal arts education and I decided that I wanted to attend one.

It’s assumed everyone knows about the college application process, but there’s not a universal application. Every school asks for different things, and many require transcripts, test scores, and essay questions. I didn’t know you had to take the SAT, or that the ACT even existed. I didn’t know you had to write a personal statement, much less how, in 500 words or less, to eloquently express who I was and why I should be accepted. At LEDA, I had an SAT-prep class, access to a writing instructor, and information about how to fill out my FAFSA, but before that, I was figuring out everything on my own.

Even with support, the process was daunting. Every time you do anything for a college application, it costs money. It’s fee after fee after fee. At my high school, almost 100% of the students got free and reduced lunch, so we were provided fee waivers for the SAT. If it wasn’t for that, and the application-fee waivers I received, there’s no way I would’ve been able to apply to the schools that I did.

On paying for college and other unexpected costs:

Thankfully, I learned about scholarships through my high school counselor and LEDA. I knew I had to find a way to pay for college that wasn’t my family, so I applied for everything. I received a Gates Millennium Scholarship, which pays for the costs listed in your financial aid award letter, minus your expected family contribution, which you’re responsible for. But if your financial aid office doesn’t list housing, transportation, books, and other costs in your letter, Gates Millennium won’t be able to cover them. So, I was always in the financial aid office and learned to advocate for myself to get my housing and other costs covered.

On working and sending money home:

I had multiple jobs because I needed money and also had to send money home. That’s something we don’t talk about in conversations about financial aid. Had I not gone to college, I would’ve been a full-time employee bringing in money to supplement my family’s income. Instead, I’m taking income out of the equation. I worked 30 to 40 hours a week in college and sent money home for rent and bills because my family didn’t have the financial luxury for me not to. A friend, who is also a LEDA scholar, put it really eloquently: “Your family’s eviction notice feels more pressing than your college education, you know?”

On being away from home:

Occidental wasn’t a commuter school, so I had to relocate to a new city. It was my first time away from home, and the student body was predominantly rich White kids. I missed home and my family. Luckily, I developed a good relationship with my roommate, who was from the Philippines, and that made all the difference. We bonded over our homesickness, and I got to know other international students through her. I also joined cultural clubs — the first-generation group became a big community of support for me — and I made friends with students I met there. 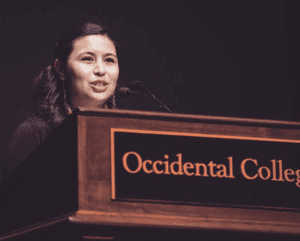 On attending a wealthy private school:

There were constant reminders that I came from a different background than everyone around me.
When I told my rich peers or even some professors, “My laptop only works while plugged in,” the looks on their faces were like, “Who doesn’t have a fully functional laptop?” I overheard peers on the phone, saying, “Mom, just send me $500.” I turned down invitations to go to museums and restaurants in LA with rich peers because I couldn’t afford to go. If I said, “Let’s take the bus,” they said, “No, let’s take Uber. You can pay me back.” But I didn’t have Uber money.

On impostor syndrome and bonding with the service staff:

I had good grades in high school. Then I got to college and quickly realized that I wasn’t at the writing level of my peers. I spent hours on assignments and got lower grades than peers who could bust out an essay in an hour.

Impostor syndrome was a term I learned later, but I felt like everyone was smarter than me, and they were definitely more well-rested than me. I remember sitting in class one day when the discussion turned to Foucault, who I’d never heard of. I asked, “Was this in the reading?” The professor and other students said, “No, this is general knowledge.” And I was like, this is not general knowledge.

Fortunately, some faculty members saw I was struggling and reached out. There was a professor in the education department who always started class with a check-in. I really appreciated those check-ins because they made me feel like he actually cared about how students were doing and if we were okay. Other faculty members urged me not to drop out and pointed me to resources like the counseling center, the tutoring center, the writing center, and the Dean of Students Office. The same faculty members would always remind me, “What you’re feeling is impostor syndrome, and other people experience it, too.”

I also became good friends with the service staff in the dining hall, who reminded me of family back home. When I was down, they’d give me a hug or encouragement – “M’ija, it’s a struggle, but it’s okay. I’m proud of you for going to college” — and that made me feel supported.

On crossing the finish line and what’s next:

I graduated in 2018. I took a gap year because there was a family emergency. I had to come home to make sure everyone was emotionally, physically, and financially okay. But I just started Claremont Graduate University in the fall to get my master’s degree in community-engaged education and social change.

I’m nervous about paying for grad school, which has more upfront costs. Luckily, my Gates Millennium Scholarship continues on, so I’ll continue to advocate to get as much covered under that as I can. I’ll work 20 hours a week as a graduate assistant, and, hopefully, find another job. This is the first time I’ll be paying for my own studio apartment, but I plan to take advantage of every program. If needed, I may apply for CalFresh or food stamps, whatever it takes to make it happen. Even if I have to work night shifts at a fast-food restaurant again I will, but I’m hoping scholarships will cover the majority of it, so I can focus on school. Education is my passion, and ideally, I’d like to end up in a community-based organization or nonprofit, like LEDA, where I can help other students like me go to college.