Why I Teach Where I Teach: To Inspire the Next Generation of Latino Writers and Debaters

Since 2014, Raymond Arroyo has been a seventh-grade English teacher at Creston Academy, a Title I school in the Bronx, New York, where 86 percent of the student population is Latino.

At first, I did not want to be placed in the Bronx. I was a native New Yorker from Queens. Any other borough would have been closer and more familiar to me. And yet out of four interviews, I was only accepted by a Bronx middle school called Creston Academy. Now looking back, I realize that being placed in the Bronx was a blessing in disguise. As a Puerto Rican who attended a prestigious university, I started to question what it even meant to be Puerto Rican. But in my classroom, my students answered that question for me.

I think back to one student, Taina, who was Puerto Rican and loved to write. She wrote pages upon pages for assignments and would not be satisfied if I did not give her a new piece of criticism every class period. Eventually, she started writing about what it meant to be a Puerto Rican living in America. We navigated that question together. At the end of the school year, I left her a note letting her know that she now held the torch for young Puerto Rican writers. Taina showed me that the writer in me was not produced by four years in college. The writer in me was always Puerto Rican.

It’s also important that young Latino students are taught by motivated Latino teachers. As an educator, I’d like to believe I contribute to the culture of my school by putting an emphasis on achieving success by following a vision.

Two and a half years ago, I took over the debate team of my school. The team had seen little success, with the exception of one or two students who performed well individually. When I stepped in, I implemented a new system that required debaters to use each other’s arguments. I was met with fierce resistance. Strong debaters who were used to working alone had no intention of sharing their arguments, while weaker debaters felt pressured by not living up to expectations.

At our first tournament, we did poorly. On the way back, I told my team I was proud of them. They looked at me surprised. So, I pointed out to them that during the tournament, they were forced to rely on each other to improve with each round. That’s when my debaters bought into my vision of the team. We went on to take first place at the city championships that year and made it into the Octofinals of a statewide debate tournament the following year. But those victories paled in comparison to the true victory of coming together as a team.

For so long, my students associated being Latino with only cultural artifacts. But when they have me as a teacher, many of them for the first time associate being Latino with being successful. I hear many of them tell me that they want to be smart like I am. But what they do not realize is that they have always been as intelligent as I am. Our culture prioritizes education. It is the greatest honor for me as an educator to pass on the tradition of Latino excellence to my students.

I came to the Bronx not knowing what to expect. Four years later, I still teach in the Bronx to shine a light for the new generation of Latino writers and debaters. In return, they teach me something new about what it means to be Latino. 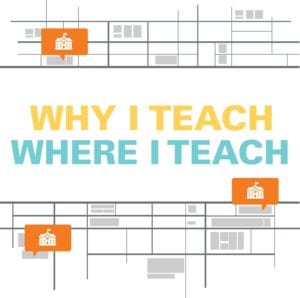