I often tell people that my English pronouns are they/them and that I identify as trans (specifically nonbinary). This is much more accessible than explaining the Diné (Navajo) particular and cultural phrase that I find most meaningful. Yet, even though I identify as nonbinary, I still find myself compared to either being ‘two-spirit’ or even gendered and associated with femininity.

Personally, nonbinary means to not identify as either a man or a woman. The phrase is a derivative of the gender binary, which asserts that there are only two gender identities, both of which I do not identify with. In addition, identifying as nonbinary was my first attempt to disrupt the process of colonization and allow me to grasp for something that felt older than me.  I was rejecting what masculinity and femininity looked and felt like. I was allowing myself to become someone who I wanted to be, not who I was told to be.

Once I embraced my identity, I experienced a personal liberation that I have not felt in my entire life and that is something I wished would be integrated into the educational system. There are identities and phrases that are not taught or shared with others, limiting the possibilities of people to become who they want to be. Even now, there are restrictions being enforced by institutions. Recently, the Vatican denied the presence of being nonbinary, ignoring and slandering my own existence. What kind of freedom are we limiting when society implements social restrictions on gender and sexuality? What kind of future will those in the Lesbian, Gay, Bisexual, Trans, Queer, Intersex, Asexual, Pansexual, and Two-Spirit (LGBTQIAP2S) community have? Will we even have a future? 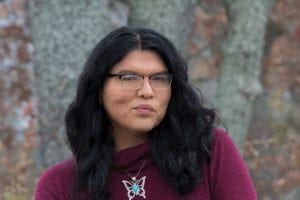 I had two different experiences when I first publicly shared my transness at two separate universities. The first time happened at Brown University, for undergrad. Immediately, people accepted my English pronouns and name change. There was very little hesitation. Some of my friends and administrators struggled, but overall, they eventually learned to refer to me using they/them pronouns and the name I chose.

The other time I publicly shared my English pronouns, and the place I experienced the most amount of misgendering was at The University of Rhode Island (URI). There, other peers in my graduate program and even the faculty struggled with my pronouns and my identity as nonbinary. For them, I was the first person they met who was/is nonbinary.

The environments at these two institutions were different. The culture and knowledge around gender identity were very stark. At Brown, the people I interacted with knew more and were more affirming than the people at URI. But the difference in my experience at these institutions remind me about the possibility of education to be a catalyst for social change. It is going to take a lot of work and energy to implement the change we need and, for many of us, seek. I only hope that others continue to challenge the systemic violence against the LGBTQ community, especially within education. In short, we need allies. Here’s how to be one:

I have this hope for change in spite of the plethora of violence against trans folks, specifically black transwomen, because Pride Month reminds me to celebrate the resilience and brilliance of people before me, and the people after me, who have continued the work of advocacy and activism through a variety of avenues. Mine just happens to be education.

Charlie Scott is a Diné (Navajo) scholar, photographer, and educator from the central part of the Navajo Nation. Charlie recently earned an M.S. from the University of Rhode Island, and will be a doctoral student in higher education at the University of Denver starting fall 2019.