Less than two years after the Supreme Court upheld the Fisher vs. University of Texas case on affirmative action, the Trump administration nevertheless continues to threaten race-based affirmative action, chipping away at education equity. The Department of Justice is currently investigating admissions practices at Harvard University, according to recent reports. Amidst this contentious racial and political climate, Ed Trust would like to debunk a few myths about affirmation action policies.

TRUTH: Both Republicans and Democrats support affirmative action policies, according to a new poll by the Pew Charitable Trusts. It found that a significant amount of Americans (71 percent) support efforts to bolster minority admissions — up from 63 percent in 2014. White Americans are also increasingly supportive of the policies: 66 percent said they had a favorable view, compared to 55 percent in 2014.

TRUTH: According to National Association for College Admission Counseling’s State of College Admission survey, only 3 percent of institutions indicate race has “considerable influence” in admissions decisions. Instead, there were 14 other criteria, such as test scores, grades, writing samples, and extracurricular activities, which were more likely to be considered than race. Only 11 percent of institutions reported that race had moderate influence, while 19 percent reported limited influence on admissions decisions. Overall, only one-third of four-year public and private institutions consider race in any way — minor or major — when evaluating applicants.

TRUTH: As a recent New York Times article pointed out, Black and Latino students — compared to their percentage of college-aged students — are underrepresented at Ivy League and other private elite institutions, liberal arts colleges, and public flagships. In fact, Black and Latino students are more underrepresented at top colleges and universities than they were 35 years ago. According to Ed Trust’s research on race-conscious admissions, the nation’s most elite research universities (comprising the 62 members of the Association of American Universities), have an undergraduate student population that is less than 5 percent Black and 11 percent Latino. Keep in mind, Blacks and Latinos make up 15 percent and 22 percent of the nation’s traditionally-aged college population — which these institutions generally serve.

MYTH #4: Colleges can consider income and not race in college admissions and achieve similar results.

TRUTH: Statewide bans on affirmative action in California, Texas, Michigan, and Washington have resulted in decreases in access for Black and Latino undergraduates. While some are touting income-based affirmative action as a viable alternative, others have shown that income-based approaches don’t yield equal results when it comes to increasing the number of Black and Brown faces on campus. The suggestion to replace race with income dangerously and falsely signals that race is a negligible factor that has very little impact on students’ educational and broader social experiences.

Additionally, income-based approaches won’t account for racial differences for students from similar socioeconomic backgrounds. Our analysis of data from the High School Longitudinal Study of 2009 shows that Black, Latino, and White students from similar income backgrounds have considerable differences in their enrollment at highly selective postsecondary institutions. And the racial differences become more profound as family income increases. Income-based affirmative action would ignore these differences by race, and would place another hurdle in the path of many Black and Latino Students. In the fourth income quartile, Black students trail White students by 8 percentage points, and by the fifth income quartile, the gap grows to 26 percentage points. The enrollment gap clearly shows that income is not enough: Colleges and universities need to continue using race as a factor in admissions. 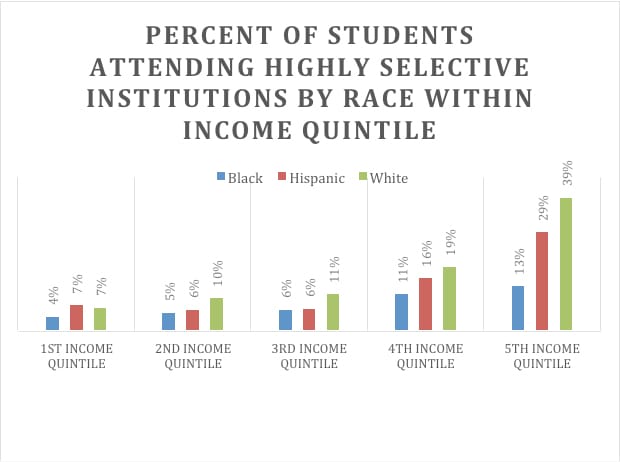 MYTH #5: Affirmative action is a non-issue because it only impacts a small percentage of students.

TRUTH: The fact is, America’s most elite colleges produce a disproportionate percentage of our country’s “powerful,” who have influence in business, politics, and other aspects of society — the overwhelming majority of whom are White. It is critical that Black and Brown students are granted access to these same spaces that usually allow their White graduates an advantage over the competition. These elite institutions typically have more resources than others and are rich with networking opportunities — because we all know that who you know is often more important than what you know. In addition, if these institutions are going to churn out our next generation of leaders, we want those leaders to have educational experiences that expose them to people who come from different backgrounds and have different experiences and perspectives. A large body of research has shown that more diversity on campus, interactions across race, and discussions about race in the classroom is related to gains in student learning.

So despite the rhetoric, the data show that there is still significant underrepresentation of students of color on college campuses. Race-based affirmative action is the best means to achieve more racial diversity on campus. Instead of arguing whether affirmative action is still necessary, we need to be having conversations about how race can be used more heavily in admissions decisions. Because everybody benefits from diversity on campus.