Getting To & Through College: Tiffany Jones

In the first installment of our new series, an African American, first-generation college graduate recalls the struggles of going to and paying for college while pursuing a Ph.D.

This series is not about them.

Instead, we’ll hear from a diverse array of students (current and former) from low-income families about their higher-ed experiences — the financial (and other) struggles they’ve faced and sacrifices they’ve made to attend and afford college.

Tiffany is the director of higher education policy at Ed Trust, so she knows a thing or two about the value of a college education. But as a child of auto-industry related employees who don’t have college degrees — not well-to-do actors — her academic journey wasn’t easy. While she knew early on that she wanted to pursue a Ph.D., it was by no means certain she’d be able to afford a degree, much less three. Thanks to various scholarships, her tuition was covered, but her dreams were almost aborted at the outset by the price of undergraduate room and board, which can cost thousands of dollars and gets pricier every year.

“When I saw that it was going to cost about $5,000 a year, and I didn’t have it, I locked myself in the bathroom and cried like a baby,” Tiffany recalls. Thankfully, officials in CMU’s admissions and multicultural affairs office arranged for her to work in exchange for housing, so she was able to go after all.

Here’s Tiffany’s story in her own words. This transcript has been edited. 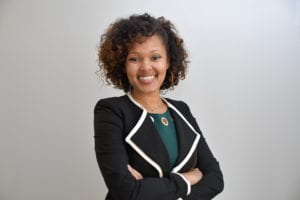 On what it took to get through her undergrad years:

I got where I am thanks to a lot of effort and special programs. I had multiple jobs in undergrad —especially in the summers — including selling peanuts at a baseball stadium, working in student government, tutoring in Upward Bound programs, and working in the dorms. Then, in grad school, I did hair, babysat, tutored at Kaplan, worked as a consultant, and a substitute teacher when I could. As a student from a low-income family, it was critical that I be paid. As a McNair scholar, I got a stipend for doing undergraduate research. McNair also paid my mentor a stipend, covered my GRE prep, as well as a visit to a graduate program. So, when I hear about Trump’s budget cuts to pre-college and grant programs, I worry that they’ll not only affect kids from low-income families who dream of going to college, which I know can be transformative — it was for me — but staff. As an undergrad, I saved that money to live on. And because I’m from a low-income family, it was necessary for me, in order to take advantage of any of this stuff, to get paid, because I was literally exchanging work hours for that.

On overcoming barriers and finding a sense of belonging:

My biggest challenge was that I was Black. I grew up in a mixed neighborhood and didn’t understand that the rest of the world wasn’t set up like that. When I came to Central Michigan — which was very White — I was unprepared to be around so many White folks who’d never seen people who weren’t White. I’d visited the campus via a pre-college program, but since we were all Black or Brown kids, they’d asked Black and Brown people to take us around. So, when I became a freshman, I was like, ‘Where are those people?’

Classes were stressful. I started as a math major, but switched to family studies (with a minor in English), which is like sociology. I had a hard time in English classes where I was the only Black student and stereotypes abounded. I remember a linguistics class discussion on Ebonics and going back and forth with a professor, who was essentially telling this class of future teachers that Black students talk like this. It was ignorant and blatant stereotyping, and I felt a responsibility to tell the class the truth about how to interact with their future Black students.

In Lansing, I’d had great relationships with teachers who supported my success, so to go from that environment to one where hate groups marched on campus — I could hear them from my dorm — and it was clear that my peers and faculty didn’t want me there was hard. I wanted to drop out every day my first semester.

Moving to Maryland was a relief. This was right before the recession, and I had worked for Upward Bound in Detroit, so I went from seeing blocks of abandoned homes and Black people suffering in that community to Prince George’s County, the richest Black county in the country. It was a more progressive area, where the police were African American, and my professors were people of color — things I hadn’t seen before — and my grad program was super diverse. Of course, I never would have gone on to study higher education administration at University of Maryland were it not for a few key mentors at Central. And the outstanding mentorship and support I got from professors at UMD were critical to my success.

USC was different, despite knowledgeable faculty and mentors. It’s private and very wealthy and my program was mostly White then, though it’s more diverse now. The benefit was that I had more resources than before, which meant my primary job was to go to school and do research with some of the best faculty in the country, and I learned a lot as a result. The focus of my Ph.D. program was urban education, so the challenge was I was the Black person, that we were studying and reading about, as a student who’d gone to an urban high school. I felt compelled to give my classmates a truer understanding of urban education and equity issues, as I’d lived and experienced them, and to correct the deficit-minded thinking and approaches that were common in our readings and discussions, and that other students of color in classrooms across the country have certainly encountered and endured.

On paying for college and everything else:

That wasn’t easy. I got a bad private loan in undergrad because I didn’t understand the difference between federal and private loans. I needed money to live on, so I borrowed $5,000 to pay rent for the year. It ballooned. Before I knew it, I got a bill saying, now you owe $10,000! And I’m like, how?

I had a GA-ship at Maryland, because when you’re a higher-ed student, they want you to get experience working in higher ed. So, I worked in admissions for 20 hours a week in exchange for tuition. The challenge was, once again, around living expenses. My stipend was about $12,000, before taxes, which isn’t much in the DC area. I tried to get food stamps, but I made about $100 a month too much.

I rarely went out. I spent $6 at Chipotle maybe once a week. Outside of that, it was groceries and ramen. My 18-year-old car kept breaking down, and I needed a reliable car to commute to work, since I couldn’t afford to live close in, so I borrowed to buy a car. My mother got laid off when the GM plant closed, so I couldn’t say, ‘Hey, I need help buying a car.’ When I needed help, I borrowed and hoped I’d be ably employed and able to repay the loan, which is what’s happened so far, so I’m grateful. But I’m still paying.

On the admissions scandal and the myth of meritocracy:

One of my jobs in admissions was recalculating GPAs. That showed me just how real privilege is and busted a lot of myths about meritocracy. GPAs had to be adjusted because Maryland gave bonus points to students who’d taken AP courses. Some students had taken six or seven AP courses because their schools offered that many, which, with the extra points, transformed their average sometimes from a 3.1 to a 3.8.

High-achieving students from schools that didn’t offer AP courses couldn’t compete because their GPAs couldn’t jump in the same way. I did this tedious data entry day after day and I saw the schools and the names. I saw which students — mostly Black, Brown, or low-income students — missed out. I saw that their White and more affluent peers had a huge advantage in what people on the outside assume is a merit-based system. Either you took AP Calculus, or you didn’t, right? Either you got an A, or you didn’t, right? It sounds black and white, but it’s not. It’s pretty inequitable.

The admissions scandal is just another data point in that story. But I’m far more worried about the ways inequity is baked into the system. It was legal to add those points, and it happens every day.

I left with about $70,000 in debt — $30,000 of that from undergrad — despite never getting a tuition bill. The bills I got were for things like living expenses and books, which could easily cost $700 for a single course. That’s why I think we have to look at the full cost of attendance, not just free tuition.