“Why Did We Even Think That Could Work?”

From computers to learning packets, educators from Steubenville City Public Schools explain their process of moving online in this episode of @edtrust’s #ExtraOrdinaryDistricts, hosted by @KarinChenoweth and @Remarsh76
Share this story 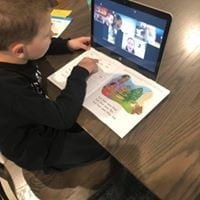 Educators in Steubenville, Ohio, have been scrambling ever since hearing that their schools might close. With no clear standards for how to operate schools remotely, they have been trying things, evaluating them, and revising. “It’s a learning process,” says Superintendent Melinda Young.

Initially thinking schools would only be closed for two weeks, teachers put together packets with review materials that students took home. As it became clear that schools would be closed longer, they moved to online instruction. They initially thought that one computer device per family would be enough, ignoring the fact that families often have more than one child and that parents also need to use computers. Looking back, Young says, “That’s kind of crazy — why did we even think that could work?”

By middle and high school, almost all students have cell phones, which means they can get on Zoom or Google Classroom calls for instruction and, Young says, assignment completion has actually gone up since school buildings closed, a mark of how students understand the current situation. “They know this is serious,” she says.

But many of Steubenville’s elementary students lack enough computers in the home or they lack internet service.

For that reason, Steubenville has developed what West Elementary Principal Lynett Gorman calls a “hybrid” plan for instruction that includes online instruction as well as paper and pencil packets of materials that provide lessons. When some families didn’t pick them up, paraeducators delivered them to families to make sure no student was left out. In addition, an extensive tutoring program in the elementary schools, where 30% of first graders, 20% of second graders, and 10% of third-graders receive one-on-one tutoring from trained paraeducators, kicked in after a few weeks, with much of the tutoring being done in half-hour increments by phone.

Looking forward, says Gorman, “We don’t want to be caught off-guard again. We like to be pro-active.” So the district has surveyed parents, and Young has brought together a district task force to make sure that at every level — elementary, middle, and high school — “We make sure we are bringing the best instruction possible.”

Steubenville is asking a lot of teachers, but a mark of how much trust exists within the district is that the union contract was just negotiated in two hours.

In this episode of ExtraOrdinary Districts in Extraordinary Times, leaders in Steubenville talk about how they are facing the coronavirus shutdown and how they hope it spurs needed changes.