Why I Teach: To Make Black Boy Success Not the Exception But the Expectation

Growing up in East New York, when I was still surrounded by the innocence of youth, I had no idea 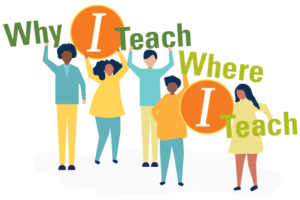 how many odds were systemically stacked against me. My parents were uneducated immigrants from Costa Rica and Cuba. We were poor, didn’t speak English, and lived in one of Brooklyn’s more historically violent neighborhoods. The fact that I sit here today, educated and employed in a career of my choice comfortably typing this piece on a MacBook in my lower crime rate Louisville, Kentucky, neighborhood is nothing short of a miracle. However, it should not be the exception for those like me — it should be the expectation. Why I teach, is to MAKE it THE expectation that all children can overcome barriers and have equitable access to an education or gainful employment.

I always wanted to be a teacher, but did not see myself as college bound at first. Thankfully, in high school, I had several teachers and a guidance counselor who saw my academic strengths; and with their help and my parents’ support, I ended up in college. Halfway through, I tried dropping out because I got depressed, but this enraged my mom. To acquiesce her fury, I got a day job as a secretary and switched to a city school, taking classes by night. I graduated and was accepted into the New York City Teaching Fellows Program with an alternate certificate for special education, which is the perfect area for me because I’m not passionate about a specific subject, but rather about raising up the students themselves.

After four years teaching in NYC public schools, I moved to Kentucky. Since the move, I have been in several urban schools and one rural school. At one point, when faced with personal hardship, I almost went back to Brooklyn to help open a school in my old neighborhood, but I felt compelled to stay in Louisville. Within months, the stars aligned, because I saw on the news that the Jefferson County Public Schools’ board had just approved a school targeting males of color slated to open in August 2018. At that moment, I knew this was my true calling. I began to follow the news until I saw who was appointed principal. Then I started to contact him to learn more and share my interest. I was determined.

After almost a year of waiting to interview, I was offered the position of special education teacher on April 27, 2018. That day is remarkable because my father passed away a few hours later. But I believe everything happens for a reason, including the timing of events. I believe he could truly rest in peace knowing his youngest was, in fact, educated, independent, and officially called to work in her purpose in paying it forward and uplifting others. 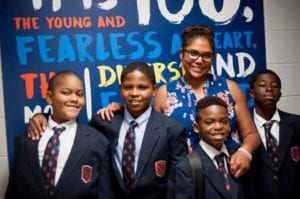 Many questioned my decision. The two questions that irked me the most included, “Why would you want to teach at a school full of Black boys?” and “So isn’t this school just re-segregating the system?” My response to the first is, Black boys are the population most in need, and my father was a Black young man once. Had there been a school designed around his needs, he would not have had to sacrifice as much as he did for me. In response to the second, why isn’t anyone calling the board in an uproar about our local alternative school, which is over 90% African American? It appears as though the narrative has been that it’s OK for our young men of color to fill up our alternative schools, but if we take a school, put those same young men in suits and try to teach them character and excellence, NOW it’s a problem. Also, the application was open to all, we have non-Afro and Afro-Latino students and White students. Some people I know personally have become uncomfortable seeing me make this move, but I do it fearlessly because it’s necessary work. Necessary not just in Louisville, not just in Kentucky, but nationally.

I do my best to give my students opportunities that as young males of color living in poverty would be life-changing. Recently, the greatest blessing in my career has been to reject the sabbatical offered by the state of Kentucky, which came with a $20,000 award. I turned around and gave that money back to my school to fund a free trip to Washington, D.C., for 28 of our students. These are students who may never have left Kentucky otherwise, but I dream that being in our nation’s capital will help them realize the sky is the limit. If their teacher who grew up in similar circumstances could overcome barriers, they can too.

I believe the universe’s reason a 45-year-old Costa Rican and a 57-year-old Cuban had a healthy surprise little girl was for her to do THE work today. I’m blessed and honored to be a part of la lucha. In service, we succeed.

Jessica Dueñas, the 2019 Kentucky Teacher of the Year, is a special education teacher at the W.E.B. DuBois Academy in Louisville, Kentucky.  A version of this article was originally posted in the September 2018 issue of Envision Equity for Jefferson County Public Schools, modified for Ed Trust.